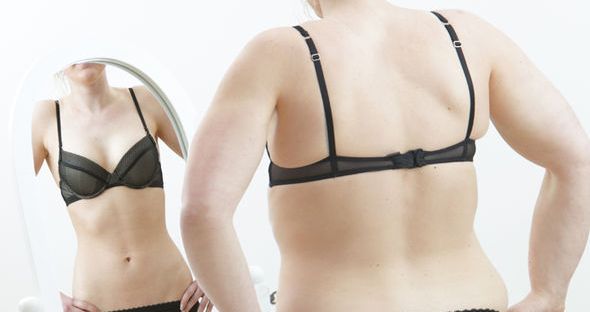 In October, my knee was killing me. I chalked it up to the heavy lifting I’d been doing since moving into my home. It wasn’t strained or swollen. It just hurt.

I’m not sure exactly when people started using the phrase “body-positive” as the catchall phrase for physical acceptance, but it likely stems from the fat acceptance movement of the 1960s. The content of my women’s and gender studies classes are a bit hazy, so I won’t go into details, but essentially, the fat acceptance movement (which intersects with the women’s movement) brought to light the many issues in fat-based discrimination, anti-fat stigmas, and aggressive diet promotion.

It’s no secret that I’ve struggled with my weight and have written about it, as documented here and here. But it wasn’t until more recently that I really understood how insidious fat-shaming is and how it’s quite literally the only generally acceptable form of discrimination, especially in the workplace. Yes, fat people have a harder time finding work and getting paid more. And as of September 2016, Michigan was the only state with anti weight discrimination laws in place. These kinds of biases can affect even the most self-assured person, making them question their self-worth in a world that has told them that thin is in.

So when plus sized models like Tess Holliday and Ashley Graham and yogis like Jessamyn Stanley and fashion bloggers and designers like Gabi Fresh began making waves by showing that fuller bodies can be sexy, strong, and attractive, many women were encouraged to love themselves and embrace being #bodypositive.

I have followed a few plus sized fashion bloggers and vloggers throughout the years and have seen how many of them have gained-and lost-a significant amount of weight. And it’s the latter that I want to discuss.

Is it possible to be body positive while also actively trying to lose weight?

Some believe that the two cannot coexist. When supermodel Ashley Graham posted a photo of herself appearing slimmer, many comments were peppered with “it’s a shame you turned your back on us”. Gabi Fresh posted a picture of herself that made her appear as if she’d lost at least 50lbs and similar comments came pouring in. Plus-sized blogger PassionJonesz lost 100lbs after undergoing the VSG procedure and lost subscribers, with people saying that she abandoned the community, and at least one follower saying “everyone is losing weight and you just had to go and be like them.” Is losing weight or even wanting to lose weight an indication that one doesn’t accept their body? I believe the answer is yes- but no.

There’s a bevy of research that shows that morbid obesity is at best, unhealthy, and at worst, deadly. We can dive into why the BMI is a flawed metric but with tools to help us measure body fat percentages, waist-hip ratios, etc., we can effectively say that outliers aside, an individual carrying an extreme amount of excess weight is likely to experience weight-related health challenges. Does this mean that they should be subject to unsolicited comments, insults, or discrimination of any kind? No. Does it mean that we can’t have plus sized models? Absolutely not. So when someone (I’ll use myself as an example) decides to lose weight to improve my overall health and fitness, I am doing so because I want to change. I am, by definition, no longer accepting my body in its current state because I want it to be leaner and stronger.

Embracing my desire to change is not synonymous with hating my body, my size, or anything about it. It doesn’t mean that I look down on others who are also overweight. In fact, and I’ve made this argument before, any healthy approach to weight loss has to start from self-love. I know a thing or two about dangerous weight loss methods and in those moments, I was feeling anything but love and respect for myself. I didn’t forgive myself. I didn’t make room for mistakes. I didn’t embrace my body. Over the last few years, I’ve lost and gained weight as stressors like moving twice in a year, being in a horrid job situation, and dealing with anxiety wreaked havoc on my weight. The wine and takeout and Netflix binge-watching sessions didn’t help, either. So I decided to approach fitness slowly, taking time to meet with doctors and keeping my workouts cheap, fun, and different every day of the week.

I have certainly had moments where I didn’t like the way my body looked. Those times often ended in binge sessions. But these days, I’m more concerned with how my body feels.

It’s been a few months since my pesky knee trouble. I’ve worked out daily and shed a few pounds since then, too.