Marvel fans and casual viewers alike can breathe a sigh of relief- the year-long buzz has not merely been hype (kind of like the Justice League-oops). It’s the real deal.

I attended an early screening of the film on Monday, February 12, thanks to a Twitter – IMAX partnership, which gave fans the opportunity to participate in a #blackpantherlive Twitter conversation with the stars of the film and then watch the movie in IMAX. At the New York City-based event, the stars answered questions, and even gave viewers across the country an opportunity to take a peek at an inside joke that led Lupita Nyong’o (who plays Nakia) to cash in on a bet and make Michael B. Jordan (Killmonger) do a push up on the spot. While the conversation was entertaining, moviegoers applauded as it came to an end. It was time to watch the film.

Obligatory spoiler warning: I won’t be revealing any key plot points but if you don’t want to know anything at all about the film, now would be a good time to stop reading.

Imagery: Wakanda is not quite like anything I’ve seen before. As an avid moviegoer, I’ve seen plenty of films featuring East African plains and rural environments. But the juxtaposition of roaming goats against a (hidden) metropolitan city teeming with street vendors, pedestrians, professionals and other worldly technology felt like my wildest dreams coming to life. As a Jamaican, I reminisced on my most recent trip there and wondered, briefly, how things would be if we had just some of that wealth.

Be prepared to feel almost overwhelmed with the amount of details and images that cross the screen. From flying wigs to zipping trains, you may often be transported so quickly from one amazing shot to another that you won’t realize you were holding your breath until it’s over.

The cinematography is very much in line with the Marvel style – broad, sweeping shots of action scenes, appropriate slow-motion edits as cars flip over and things blow up, and what I loved most – a poignant scene where T’Challa struggles with responsibility, grief, and loss. It is more beautiful in film, thanks, in part, to Hannah Beachler (production designer for “Moonlight”).

And yes, everyone is black.

The Story: One of the issues that some Marvel movies face is that a strong story line is often sacrificed in favor of witty banter, gravity-defying action, and the overarching need to connect to the other characters in the Marvel Cinematic Universe in preparation for the Infinity War. Save for a plot hole that I suspect may be answered soon, this movie didn’t have that issue.

Viewers get to see a younger King T’Chaka as Black Panther, a son of Wakandan tradition and willing to uphold it at all costs. It isn’t long before we realize just how harmful tradition without empathy can be (sound familiar?).

The theme of tradition and calling on the ancestors for guidance is what powers the film, which is why Erik Killmonger, similar to Magneto, is a “villain” we can relate to. Misguided, but only because he subscribes to the Machiavellian “ends justify the means” tactic that ends up doing far more harm than good. I’ve never taken to villains or antagonists who were evil just for the sake of it. Erik’s reasons are sound – his method is not. Michael B. Jordan is a master at playing these kinds of characters. There’s nothing one-dimensional about Killmonger and you know why almost immediately. I only wish that the script was filled with the kind of dialogue that would support the full range of this character. There were several times when I was left wanting him to say more.

The Dora Milaje – King T’Challa’s all-woman security team- is a fan favorite. From the vibrant red of their armor to their synchronized battle style, I was excited whenever they were on screen. As a fan, I expected more from them but frankly, Okeye (played by Danai Gurira) was all that mattered. She, along with Nakia and Shuri (T’Challa’s genius little sister who heads up Wakanda’s tech) quite literally save the day on more than one occasion. You know how in Harry Potter everyone knows Harry would’ve been dead if not for Hermione? 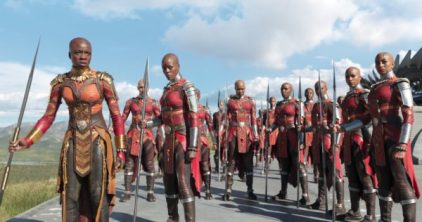 My Take: There will be a lot of conversations surrounding some of the themes that emerge from the film: love, tradition, and duty, to name a few. As a first-generation American, I closely identified with the struggle T’Challa faces as pressure comes from multiple sides to have Wakanda open its doors to refugees and distribute foreign aid. Wakandans live hidden – shrouded in the belief that in order to thrive, they must keep to themselves. But with unimaginable wealth and technological resources, T’Challa and others grapple with the guilt in turning a blind eye while other Black people of the diaspora suffer.

Black US immigrants often deal with similar struggles, with many instructing their children to stay indoors and focus on attaining their piece of the American Dream. We’re often told outright that we can’t solve worldwide problems and our best bet is to focus on ourselves and our families. This means getting degrees with high ROIs, buying homes, and adhering to respectability politics, as to not ruffle any feathers. We don’t have the freedom to be too loud, too joyous, or too black.

Our parents were and are trying their best to secure some modicum of financial and social freedom for themselves and their children. And in Black Panther, Wakandans who cling to tradition are trying to maintain theirs.